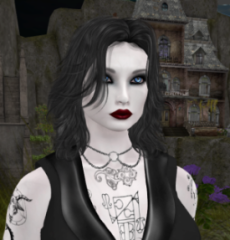 Welcome to my blog. I’m a DJ in Second Life and I find myself discussing the music I’m playing with many of those in attendance at my shows. Unfortunately, when I am busy DJing, I can’t participate and discuss the music as fully as I would like. I’m hoping this blog can help change that. Look here before my set to see if I might be playing something interesting today or maybe after to see if discussion on a topic might continue. You are invited to join in the conversation and leave comments. 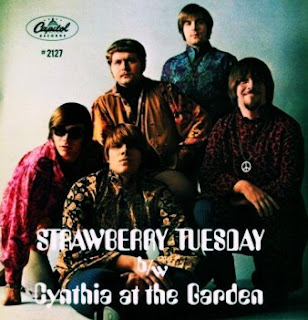 It was almost two years ago that I posted here about the music that I most like to listen to.  At that time I admitted to being a psych-head and that late 60s psychedelic acid rock is my greatest musical love.  (See What Does Sue Listen to: Pt. 1 Farfisa and Fuzz, July 31, 2011)  At the end of that post I announced a mini set that I planned to play at an upcoming show, to spotlight some examples of the type of music I love.  The first song listed was a gem called “Strawberry Tuesday” by the Sidewalk Skipper Band.  It is a great tune and a personal favorite of mine from that genre.

The Sidewalk Skipper band was from Milwaukee and they began their career doing college gigs at Marquette University.  The band consisted of David McDowell on lead guitar and vocals, Rick Novak on guitar, Brian Ballestrieri on keyboards, Joe Ballestrieri on bass and Tom Jukem on drums.

By February 1968, they were signed with Capitol Records and in the studio recording in Chicago.  Soon they had released their first single, Strawberry Tuesday/Cynthia at the Garden.  This was followed by a second single in May 1968, It's Raining Flowers in My House/Seventeenth Summer.

So why did they never catch on?  It might have had something to do with the way Capitol marketed them.  It could be easily argued that the Psychedelic Movement originated in the United States, but it was British bands like the Beatles, the Bee Gees, the Stones and Cream who were taking it to a whole new level.  It was all part of a larger movement called the “British Invasion,” and America was always looking for its next “response” to the invasion.  It was quite overt with some bands, like Paul Revere and the Raiders.  During this time, various psych bands in the UK were able to thrive by releasing 45 RPM singles, but this wasn’t the case in America.  The American psych-head wanted to smoke a joint, or drop acid, and listen to an entire LP album side, without having to change the record after each song.

Maybe if they had released a full album, they might have become a psychedelic household name like the Strawberry Alarm Clock or the Electric Prunes.  A while back, a 12” acetate surfaced with more material, so obviously they did record more songs.  By 1969, they had left Capitol and recorded one more single with a label called “Teen Town,” Jeanne at the Circus/Sidewalk Skipper.  They disbanded shortly after that and the Ballestrieri brothers went on to open a club called the “Stone Toad.”  Brian Ballestrieri would also go on and record as a solo artist, with limited success, in the 1970s.

Tomorrow (Tuesday, June 4) I will do a mini set of the Sidewalk Skipper Band and play the following songs:

Those make up the both sides of the two Capitol singles recorded and released in 1968.  I have never seen a copy of the Teen Town single released in 1969.  As their 1968 promotional material put it, “America is ready for the SSB!”
Posted by Sue Mowadeng at 4:32 AM

Email ThisBlogThis!Share to TwitterShare to FacebookShare to Pinterest
Labels: The Sidewalk Skipper Band

When DJ is Streaming in Second Life, you can listen to her stream on your computer with nothing more than an internet connection and audio software such as iTunes or WinAmp. Remember, the times on her schedule above are Pacific Coast times in the United States. Sue's stream is located on the web, HERE. 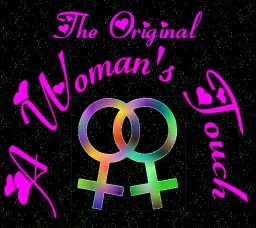